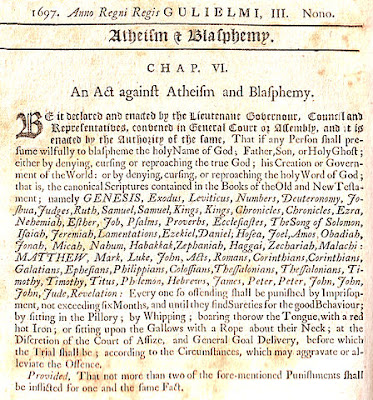 Today is International Blasphemy Rights Day. In the United States, our speech is protected, and this allows us to say whatever we wish about religious figures, doctrines, holy books and the like. Here is a list of some of the countries that not only disregard this freedom to blaspheme, but often punish blasphemers, sometimes by execution.

The severity of punishments for blasphemy vary from country to country, and there are several countries that I did not list that still have anti-blasphemy laws on the books, but realistically don't prosecute offenders (Canada, Australia, and some local jurisdictions in the USA). There are also several countries that just recently repealed these sorts of laws.

Today's "holiday" is not an excuse to offend people, but a day to promote freedom while raising awareness about oppressive legislation. Be glad of your freedom, and don't take it for granted.

Eric Burton
Former Christian, turned non-believer. Total layman with interests in science and philosophy. I am not an expert by any means - I want to help share my passions with others.